The Tree of Life

When I first saw mentions of The Tree of Life, I got a strong feeling that I had to see it. Something about the few little snippets I came across appealed to me and urged me to see the movie. Before I had the chance, though, I had only spoken to two people who had actually seen the movie.
One hated it, and told me that some people had even left the movie theatre during screening. (The film, featuring Brad Pit and Sean Penn and as of yet less known actor Jessica Chastain, may have prompted an expectation of a typical American feel good film). Another loved it, and promised me, if I liked it, several recommendations of movies by the same director.
The movie, directed by Terrence Malick, was several years in the coming, which is not difficult to understand, watching and experiencing the movie.
The concept of non-linear narrative is unusual, but never confusing; the voice/monologue of the main character gracefully binds it all together. Neither was the scarce dialogue disturbing, due to Malick’s skilful directing and the actors’ performances.
The amazing filming, the depicting of the actual awesomeness of the world around us, is beautifully done, leaving you in doubt of where natural phenomena end and animation begins.
The result is a beautiful, poetic piece of art, telling a story of life, death, love, faith, loss, grief, innocence and loss of same, conflict goodness-selfishness, hope, perseverance, reconciliation and much more.
All set against a backdrop of the birth and death of the universe(s), and everything in between, besides, above and after.
Even though this is not a feel-good-film per se, it left me, somewhat surprisingly, with a strange peace of mind.
To see how it will leave you, you’ll have to go see for yourself…
I for one, in addition to already having browsed the net for more movies by the same director, will go back to my positively inclined source for more recommendations:-) 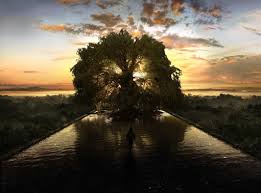