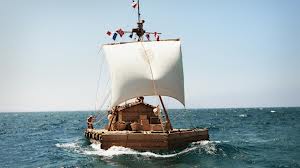 One might think that six down-to-sea, unkempt men on a balsa raft, alone on the same open body of water for 101 consecutive days, could be no match for e.g. spaceships in intergalactic battles when it comes to action filled entertainment.

On the surface there might not be too much going on, but down below, both in the sea and the minds of the men, the movie Kon-Tiki is packed with visual and “special” effects. Numeral encounters and occasional clashes with amazing wildlife are as spectacular as they are convincing. Depicting drama and conflict between man and beast and amongst the men themselves.

The story might well have justified oversized words, but the moviemakers don’t fall into that trap. Instead, the script is low key, simple, but with a simultaneously heartwarming and harsh humor, often revealing the strain the men were under, individually and as a team.

“Why do you want to climb the Mount Everest?”, the British mountaineer George Mallory was asked. “Because it’s there”, was his reply. He died in 1924, in an attempt to be the first man to ascend what since then has proven to be a man devouring mountain*.Twenty-three years later that same spirit, coupled with a wish to prove a Peruvian origin of the Polynesians, made the explorer, adventurer and author Tor Heyerdahl leave everything behind, gather a motley crew and set out on a balsa raft, making a daring 101 day dash across the Pacific.

In doing so he went against popular scholarly currents, but with favorable ocean streams and prevailing winds of the Pacific. At the time, archaeological evidence for the accepted theory stating that the islands were populated from Asia in the West, was scarce. Heyerdahl decided to give his own theory a shot. A long shot, one might say, but an incredibly impressive one.

The movie relating the story of the preparations and the voyage itself, renders irrelevant both compass points and who’s in the right or wrong. The share notion of someone going to such lengths, defying all opposition, showing such audacity in order to pursue a dream and hopefully prove a hypothesis, is mesmerizing. The young Mr. Heyerdahl was probably not the most self-effacing of persons, and his belief in own abilities and theory is poignant. However, without precisely those traits, the crossing would never have taken place.

Even when drifting in the wrong direction for days on end, storms playing havoc with their raft and the vessel itself actually slowly disintegrating below their feet, Heyerdahl seems to have kept a firm belief in successfully completing his mission. In the movie, a steel wire proffered by one of the crew to secure the balsa logs is hurled far out into the sea. A symbolic gesture of conviction and confidence, and a wish to be true to his project, adhering to the ways of the ancient mariners. 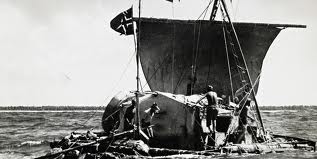 The same belief and conviction keep rubbing the established elite within anthropology and history the wrong way. Probably afraid to be thrown off their high nags, their own often flimsily based theories being toppled over in the fall, many have lashed out against Heyerdahl. The jury is still out about migrations of ancient peoples, and will be for years to come. The truth of the matter is, however, that dare-devilled, stubborn and dedicated individuals like Mr. Heyerdahl move the frontiers of our knowledge, forcing us to go beyond accepted paradigms and look at things from a totally different perspective. In this case the sea, which Heyerdahl, if nothing else, proved was less of a restriction than a means of getting from one place to the other, even if that place was unfathomably 6500 kilometers away.

*he and his mate may have been successful, was last sighted only a few hundred meters from the summit.